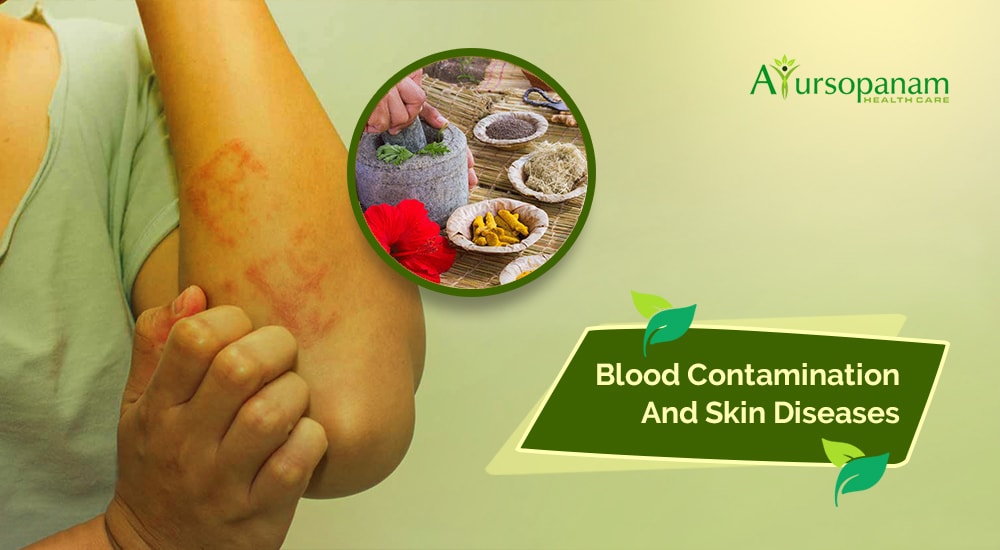 Blood contamination is the root cause of almost all skin diseases affecting the body. Blood impurity first appear over the skin. Blood and skin are so closely interconnected. Pure blood gives good colour and radiance to the skin. Changes in lifestyle make the blood more impure. Fast foods like junk food, and foods that contain chemicals which enhances colour, odor and flavour, chemical preservatives as well as spicy foods and contradictory foods can produce blood impurity. Decreased immunity also can impair the normal health of the skin and cause skin diseases of prolonged duration.

Chenkarappan is a skin disease that appears in new born after birth and can sometimes last for a long time, if ignore.

What are the symptoms of Chenkarappan?

They appear as swellings all over the body. Red spots that are seen in the first few days will spread to all parts of the body within a short period. Sometimes there is fever also.

What are the causes of Chenkarappan?

The disease can be caused by the vaginal discharge contact during childbirth or by unhygienic conditions related to the baby and mother. It can also gradually develop into Astma like respiratory diseases.

What are the diets and treatments for Chenkarappan?

Do not use soaps, body lotions or body creams. Instead, Eladi choornam can be used to cleanse the body. Do not use yogurt, chicken, eggs, spices or pickles. Aravindasavam, Mustharishtam, Khadirarishtam, Mahathiktakam kashayam, Nalpamaradi Kera Thailam and Dinesavalyadi Kera Thailam should be used under expert medical advice.

Neerkarappan is a red spot and swelling that appear over the body of the new born within three weeks of birth.

What are the symptoms of Neerkarappan?

Wide spread swelling occurs over the body. The face is generally swollen with redness around the mouth, nose and anus. The red spots that first appear will gradually develop in to ulcers. Along with fever, it spreads throughout the body causing pus formation, and will spread to others also.

What are the treatments to get rid of Neerkarappan?

Do not use soap, shampoo or cream. Eladi choornam can be used to cleanse the body. Do not use yogurt, pickles, spices, egg and meat. Ayurvedic medicines like Nimbasavam, Patolasavam (Padolarasam), Mahathikthakam Ghrutham and Gopadmajadi Kera Thailam etc. can be used under the prescription of a doctor for complete cure.

What is a Tinea versicolor?

It is a skin disease that develops due to fungal infection. What are the symptoms of Tinea versicolor? Can it be passed on to others? It appears over the skin, hair and nails, hairless part of the face, neck and arms. Occasional eruptions appear in a red circle. It does not have the same colour as the skin. It will soon spread to other parts of the body. There will also be untolerable itching. In some, it causes only discoloration of the skin without any itching. These are only some symptoms. It is better to seek the advice of an expert for the correct diagnosis. It can spread to others, if left untreated.

What are the symptoms of Tinea versicolor? Can it be passed onto others?

It appears over the skin, hair and nails, hairless part of the face, neck and arms.Occasional eruptions appear in a red circle. It does not have the same colour as theskin. It will soon spread to other parts of the body. There will also be untolerableitching. In some, it causes only discoloration of the skin without any itching. These areonly some symptoms. It is better to seek the advice of an expert for the correctdiagnosis. It can spread to others, if left untreated.

What are the treatments and diets for Tinea versicolor?

Never use soap, combs, clothes and towels used by the people having this type of infections. Do not use soap or shampoo. Eladi choornam, Nimbadi choornam, Sidharthaka Snana Choornam etc. can be used for cleansing the body as prescribed by a doctor. Drugs like Patoladi kashayam, Thikthakam Ghrutham and Panchavalkadi Yamakam etc. can give complete cure if used under expert advice.

What is a nail fungal infection?

It is a type of fungal infection that affects the nails. The main reason is poor hygienic condition.

Initially a grey or yellow circle appear over the corners of the nails and fingers. It quickly develops and spreads to the internal part of the nails. The nail loses its natural colour and beauty and fades in to grey as if it had been scratched. The disease is contagious. Dogs and cats can transmit the disease to other domestic birds and animals. The disease is more common in people who work in wet environment in which the arms and legs are always in water like fluids.

What are the Ayurvedic treatments for nail fungal infection?

Rinse nails with lukewarm salt water. Mix Eladi choornam in lemon juice and apply externally. Use medicines like Khadirarishtam, Punarnavasavam and Gulgulupanchapala choornam as prescribed by the doctor.

The main cause of this is a microbe named Sarcoptus scabies. Excessive consumption of spicy food and red chilli along with foods, can cause blood impurity. It is also seen as a reaction of certain drugs. Decreased immunity can also lead to such skin infections.

What are the symptoms of scabies? Is it a contagious disease?

In this disease, at first there will be untolerable itching in between the fingers and toes with thin white fluid secretion. Then there are occasional itchy rashes on the body. It will spread to others very quickly as it is a contagious disease. The disease is manifested with fever and may persist for a long time if ignore.

What are the diets and ayurvedic treatments for scabies?

Do not use yogurt, pickles, spices, egg, and meat. Instead of soap and shampoo, can use Eladi choornam and Nimbadi choornam to cleanse the body. Medicines like Gulguluthikthakam Kashayam, Aragwadamahathikthakam Ghrutham, Moolakasavam and Nalpamaradi Kera Thailam etc. are suitable as prescribed by the doctor.

Indralupta is a fungal infection that causes hair loss on the scalp.

What are the symptoms of Indralupta? Will it spread further?

It appears over the hairy parts. The hairs on the affected area lose it’s softness and become coppery in colour, dry, weak and itchy. The diseased part of the scalp is round and the hair follicles appear smooth or reddish and fall down. This may spread to more places over the head.

What are the diets and treatments for Indralupta?

Soap and shampoo should not be used. Cleanse the head and body with Eladi choornam. Do not use yogurt, pickles, egg, spicy food or meat. Medications such as Khadirarishtam, Patolasavam (Padolarasam), Punarnavasavam, Aragwadamahathikthakam Ghrutham,Panchavalkadi Yamakam and Gopadmajadi Kera Thailam can be used by the advice of a doctor.

Psoriasis is a disease that affects the patient physically and mentally. In Ayurveda it is called Siddham.

What are the symptoms of psoriasis?

The disease is caused by poor blood quality due to overuse of foods, pickles, egg, spicy food, poultry and bakery sweets, excessive alcohol consumption, stress, smoking, sleep apnoea and exposure to chemicals such as paint etc. that damage the skin cells. The main symptoms of this disease are red thick spots and white dust when itching. The affected part will become covered with scales. It also thickens the skin.

The fact that many people turn to Ayurvedic treatment when the disease is in chronic condition and have failed various other treatments. This delays the complete cure of the disease. It is mandatory to follow a correct diet pattern along with the prescribed medicines without pickles, spicy foods, egg, meat, baked eatables that fried in oil etc. Instead of soap and shampoo, Eladi choornam or Nimbadi choornam must be used to cleanse the body. The disease can be completely cured in the early stage by the use of Gulguluthikthakam Kashayam, Punarnavadi kashayam, Thikthakam Ghrutham, Madhusnuhi rasayanam, Khadirarishtam, Brihath Danthapala Thailam and Dinesavalyadi Kera Thailam etc. after the exact diagnosis of the disease by a physician. Strict adherence to the diet regime will have a vital role in the cure of psoriasis.

What is dry skin?

Dry skin is a common condition. It is a skin disease in which the skin becomes dry, non-oily and rough.

What are the symptoms of dry skin?

The main cause of this visually impaired condition is a defect in the sweat glands and channels that carry sweat. Some people are born with this condition as a hereditary disease.

Suitable medicated oils can be massaged over the whole body down to the neck at least once in a week. It is better to use Sidharthaka Snana Choornam and Eladi choornam to get rid of the dirt to cleanse the body. Soap must be avoided completely. Punarnavasavam, Manjishtadi Kashayam, Pinda thailam, Madhuyashtyadi Thailam and Nimbasavam may be used under expert supervision. 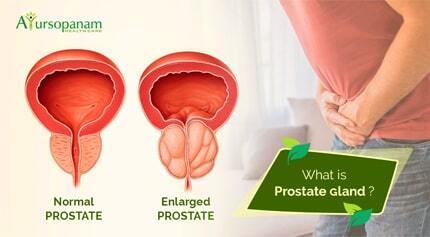 This gland is a part of the male reproductive system 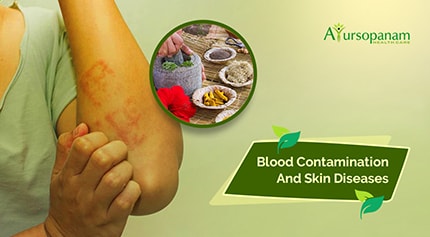 Blood contamination is the root cause of almost all skin diseases af... 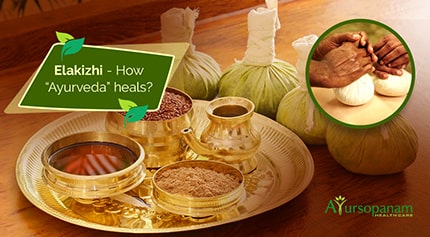 Stroke is a musculoskeletal disorder that occurs when a blood clot i... 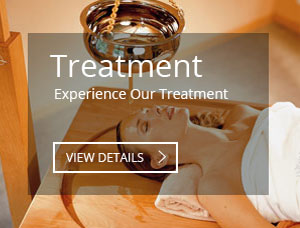 " Thank you very much for the good treatment. Very good massage from nice ladies. It is a very hygienic place. Very good advice from Chief. Good to know many things in Kerala. I recommend this place. "